Vienna Vignettes: Notes from the City of Music

The following vignettes and some of the photos were recently published on my Facebook page “Ach ich fühl’s” when I reported about my trip to the birthplace of European classical music to give a language workshop to Vienna-based singers from Australia and USA. 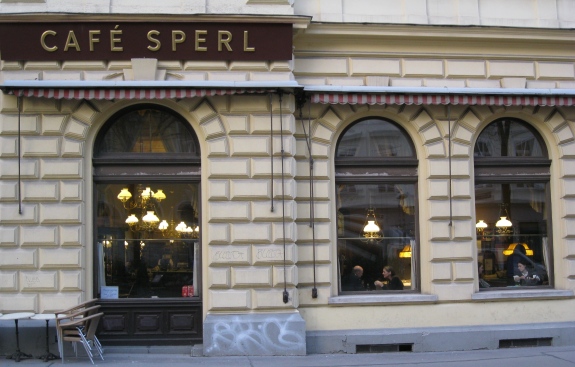 COMPOSERS’ HANGOUT. Johannes Brahms drunk wine here with old friends like the violinist Joseph Joachim. For decades writers, artists, and singers debated, celebrated or debunked ideas, art, or themselves at this place: Cafe Sperl on Gumpendorferstraße, close to Naschmarkt. Opened in 1880, it is a landmark today, a corner cafe where you can eat Nockerln and drink Melange and choose from more than a dozen newspapers and magazines that are spread on a giant table. There are many waiters if you consider their ratio to the number of guests, but they do not seem to be idle. Walking back and forth in their uniform, they scan the customers’ faces for any sign of need. The wooden panels on the walls have been darkend by time and cigarette smoke. The chairs and tables have seen better times; the place looks verlebt (raddled) and the best service it gives tonight is to charm the visitors. The guests are from the neighborhood. They pop in just for a little bit to eat, mostly with friends or colleagues with whom they have to discuss urgent matters, at least that’s how some conversations sound. The sing-sang of the Viennese accent floats through the room, pinched by the clicking sound of billiard balls from the end of the room. 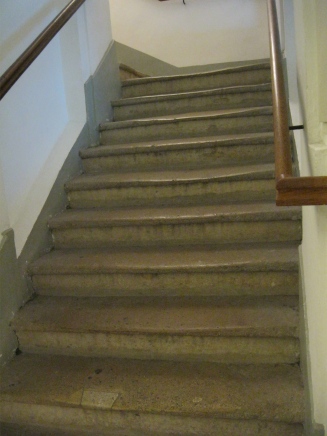 FIGARO’S HALLWAY. Don’t take the elevator, take the stairs. He ran them up and down, a melody in his head you treasure today as the most beautiful. Mozart and his wife Konstanze lived on the first floor (in America the second floor) in Domgasse 5, one of 13 apartments he had in Vienna. (Consecutively, not in the same time – he was not in real estate.) The apartment encircles the staircase, has two entrances and seven rooms in which he and Konstanze crammed 18 chairs, seven tables, several canapes, wardrobes, and cabinets. In the large room, facing the Domgasse, the six famous quartets which Mozart had dedicated to Haydn were played. The older composer was present and wrote later to Mozart’s father, ”Before God, and as an honest man, I tell you that your son is the greatest composer known to me either in person or by name.” 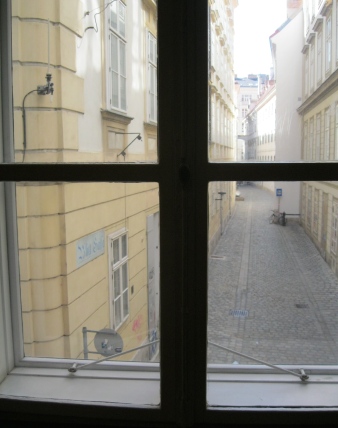 View from the room where Mozart and his friends played cards, billiard, and music, amongst others the Haydn quartets.

Next door, I step into Mozart’s study, in a glas box a golden musical clock. French teenage students rush in, turn around and vanish, a whirlwind of youthfull ignorance, leaving me alone for a couple of minutes. I approach the six score sheets that hang on the wall, each with 12 lines of music, Mozart’s daily output. I stare at the notes on the yellowed pages, meticulously written down without corrections, without blots or scratches, and it is impossible not to turn around and look at the room – three by four meters – and turn back to the pages and realize, that these notes had been written, that this music, Le Nozze de Figaro, had been created in this very space. 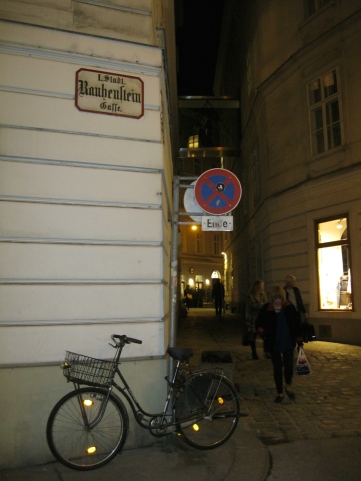 MOZART’S DEATH: We heard of his death in the early morning hours. We hurried to his house, Rauensteingasse 8. Thirty of us, maybe 35. It was a mild morning for early December. Someone said they have brought him to the St. Stephan Cathedral already. We saw light in the first floor windows; shadows moved. We heard, he had been working on a Requiem, and he, his wife and his student practiced it a few hours before he died. In around sixty years the house will be torn down and replaced with another one, and after sixty more years a department store will be errected at this place. 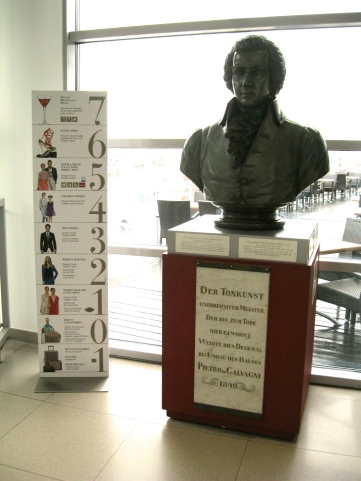 In around 150 years, a war will rage, so terrible that the words of our time fail to describe it. So much can be said that the department store will go up in flames. It will be rebuild and named Steffl, will be remodeled, it will catch fire again, this time by a technical failure, be renovated, sold and resold. A man from Duisburg, Germany, will come in 1980. He will discover the Mozart bust in the sports department between bikes and sports suits and running shoes. He will photograph the bust, but he will lose the black-and-white picture. He will return in 2017 and he will be surprised how the store has changed. It has marble floors. The sales people are better dressed. It offers fine clothes; women’s clothes in the first floor, on the left side. Here, between the racks with silk dresses, wardrobe of Philosophy and Boss Orange, is the space where Mozart wrote the Zauberflöte, and where he took his last breath. 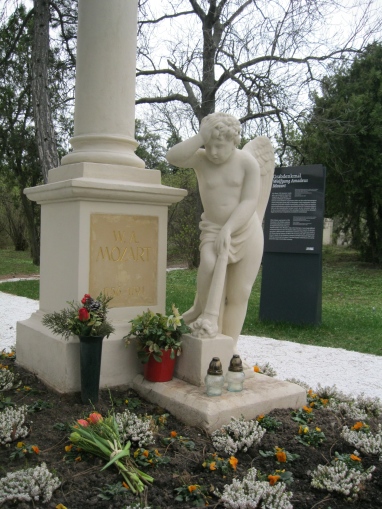 The apartment was huge for a family of three, 145 square meters; it even had a billiard table. The man from Duisburg finds a leather sofa. In his head, he hears “Ach ich fühl’s” until he notices that he is staring at changing cubicles. From time to time a curtain is drawn back, and a women looks into the mirror, a price tag dangling on the elegant clothes she is wearing. The man prepares an excuse in case a sales person approaches him. He would say, he is waiting for his wife, but nobody asks him. He gets up and sees a young fellow, dressed in sneakers, blue jeans, and an old jacket. It seems the young fellow is not interested in the clothes but moves like a thief and looks furtively around. The man from Duisburg knows the young fellow is searching for the bust, too. They will find it on the top floor, next to the department store’s restaurant. A sign says it is the first Mozart bust ever created, some years after his passing. The man from Duisburg will take pictures and upload them into eternity.

It started to rain, and it is getting cold. Someone said, a storm is brewing. As we left, we wondered if Konstanze will follow the coffin up to the St. Marx cemetery the next day, a long road, through the mud, the wind, the icy rain, and through her sorrow, which soon will be, few of us sense it already, the sorrow of mankind.

MUSIC LOVERS’ TOILET. If you need to relieve yourself, you will find a special public toilet in the subway station Karlsplatz, close to the Staatsoper, a vintage restroom with an opera theme, subsequently called Opern WC. 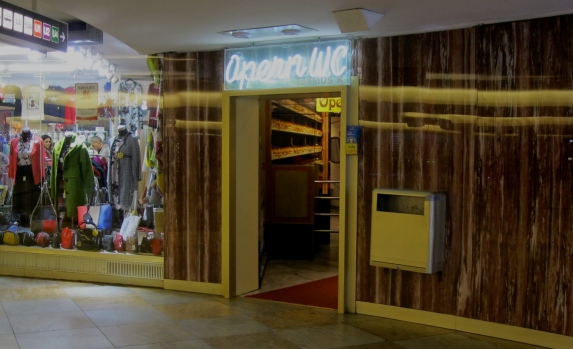 When you throw 70 cents into a box, the turnstile opens. At the wall next to the sink hang pictures of singers and stage designs. From loudspeakers, opera recordings are played. Here, the diva is the smell; it dominates the space and gets on your nerves like acid. Across the pissoirs restricting the space stands a piano. A player could hunch over the keyboard and play without disturbing the customers unless the customers would like to be a little bit more active and extend their business at the urinal. No player is in sight, though. Calls to the toilet management to inquire about the vacancy of the pianist post have not been returned. 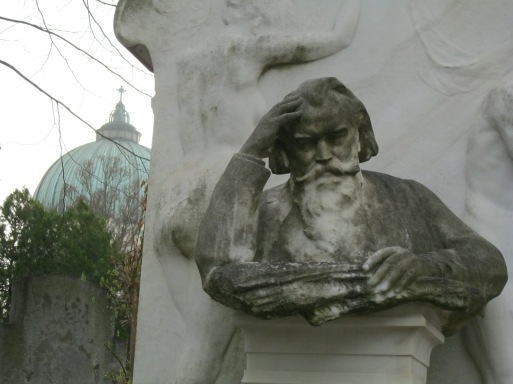 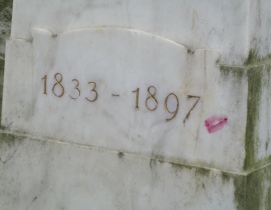 ADMIRER’S KISS. Johannes Brahms got the kiss. Streets, even a bus line, pass through the Central Cemetery in Vienna, with more than 2 two million inhabitants the largest in Europe. The most famous of them are situated around a Mozart statue. Beethoven to the left, then Schubert, then Johann Strauss, and eventually, on the right, Johannes Brahms. Fans brought flowers and put them at their feet. One admirer wearing thick lipstick, left a mark of love on Brahms’ tombstone. 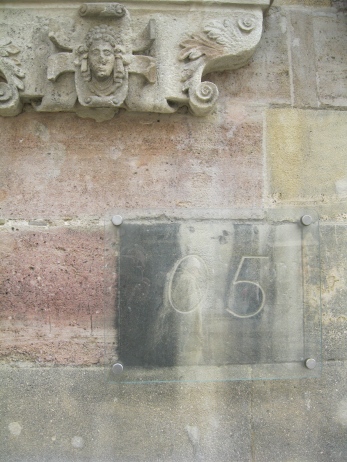 RESISTANCE’S LANGUAGE. The sign “O5”, scratched into the wall of the St. Stephan cathedral, was the secret code of the Austrian resistance against Hitler after the annexation of their country in March 1938. (First thing the nazis did was bringing the Austrian gold reserve from Vienna to Berlin to finance the preparations of the war.) For the nazis Austria did not exist anymore, just the region “Ostmark”. But the resistance thought otherwise: The number 5 in the code stands for the fifth letter in the alphabet, the “E”. Put “O” and “E” together you have “OE” which is the way to write an “O” with umlaut: Ö. The Ö stands for Österreich (Austria). Nearby, next to the Sacher Hotel, in front of the Albertina museum: In April 1945, few days before the end of the war, a bomb hit a house killing more than 100 people who had sought shelter in the basement. The “Memorial Against War and Fascism”, created by the great Austrian sculptor Alfred Hrdlicka, reminds of the tragedy. It is build with granite from the quarry in Mauthausen which was also a concentration camp, not far from Vienna. Thousands of prisoners from all of Europe worked and died here.