Everyone Needs an Old Man in Rügen

Last week this blog has started to publish a series of profiles of young American, Canadian, and British singers who went to Germany to sing and live. Their answers to a small set of questions show what it takes to move to a foreign place, mainly to Berlin, and pursue the career of their dreams.

From where?
The US. I grew up in Kansas and also lived in New York for a while.

Your favorite role:
It’s hard to pick one! Susanna in Figaro is probably my favorite.

Best opera production you saw in Germany:
Die Zauberflöte at the Komische Oper Berlin and a dress rehearsal of Macbeth at the Staastoper Berlin.

Craziest opera production you saw in Germany:
hmmm, I don’t think I’ve seen anything that was really crazy. At least not in person!

Your hero in opera:
There are so many singers I admire. Dietrich Fischer-Dieskau, Rene Pape, Renee Fleming, Bryn Terfel, Christa Ludwig, Anna Prohaska, Thomas Quasthoff. There are many others.

Your hero in real life:
My mom.

Two things you like about Berlin:
The transportation system is great and the city is very open-minded and tolerant. It’s also very dog friendly.

Two things you don’t like about Berlin:
Stores not being open on Sundays and all of the smokers. 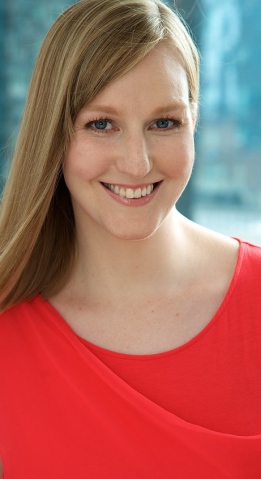 A story in which you were glad that you spoke German:
I’m still working on German and I think I will be working for a while. But earlier this year, I was in Rügen, walking along the beach. It was around Easter and cold. An older man asked me a question about my dog. He realized almost immediately that I wasn’t German and then asked where I was from. We had a nice and long conversation about his life (he was celebrating his wedding anniversary) and mine and just had a really nice talk together. I didn’t understand everything he said, but he was patient and repeated things for me. I felt really capable and knew that learning German wasn’t as impossible as it had felt up to that point.

A story in which you made an embarrassing mistake in German (if you want to tell):
I was at an audition recently and the agent was speaking only German to me. I had a general understanding of what he was saying, but the specifics were beyond me. I was so frustrated with myself, but it’s motivated me to work harder. (I do want to point out that I had studied German before coming here and had completed level B1. But studying in a classroom and using German in real life are not the same thing).

Your most recent performance:
A recital earlier this year. I did a program of mostly Schubert songs and I also sang some American songs.

Your next project:
Sometime this fall I’ll be doing another recital. My accompanist and I are still working on the repertoire, but it will probably be an all-German program.

Your favorite quality in a singer:
Uniqueness and fearlessness. It’s easy to have a beautiful voice. But I like singers with interesting voices. I also really like working with singers who learn their music inside and out.

Your favorite quality in a dog that travels with a singer:
A willingness to travel in a bag. I say that jokingly and seriously at the same time. I’m very lucky because my dog is a patient traveler, good-natured, doesn’t mind my practicing, and is at home as long as we’re together.

Your favorite German word:
Dichterfürst, because I think prince of poets is a lovely phrase and beautiful way to say poet laureate.

Listen to audio of Danielle Musick’s singing at Soundcloud:
https://soundcloud.com/dsm4101